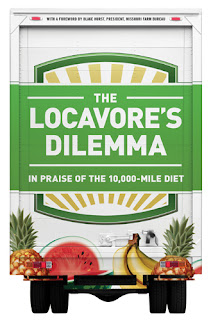 Food production and distribution is a complex business, so let us begin by making the obvious point that not all “local” food is created equal and that some of it is perfectly fine with us.

For instance, New Hampshire maple syrup, California strawberries, Alaskan salmon and crabs, Washington apples, Florida oranges, Michigan cherries, and Iowa corn are among the best and most affordable in the world and, as a result, have long been enjoyed by nearby and distant consumers alike.

Competitively priced, high-quality seasonal local fruits and vegetables have also long been sought after by nearby grocers and restaurateurs alike. “Hobby” gardening is its own psychic reward and should not be judged by economic criteria. In isolated rural areas where land is cheap, game animals abundant and economic opportunities limited, it often makes perfect sense to cultivate large vegetable gardens along with fruit and nut trees; to keep animal coops while having a few grass-fed ruminants roam over the surrounding pastureland; and to supply one’s pantry, root cellar and freezer with the results of hunting, fishing and harvesting wild food of various kinds. Local food items that might not be the most delicious or economical might also have other redeeming qualities, such as an orchard that survives on “pick-your-own” family outings or an otherwise average vineyard to which a gourmet restaurant has been added.
Some overpriced local food might also be sold for charitable purposes.

“Local when sensible” is obviously not our concern, nor do we believe that most committed locavores sincerely promote the cultivation of pineapples or bananas in the American snowbelt; in our experience, they would rather have local residents get by without them. We don’t even disagree with their belief that “eating locally means eating seasonally” which, in turn, results in “deprivation lead[ing] to greater appreciation.” In our view, food masochism should be left to the realm of personal preferences. Rather, we draw the line where local food is deemed desirable simply because of its geographical origin and is not more affordable, nutritious, safer, or better tasting than alternatives produced further away.

Locavores and people otherwise indifferent to the movement might interject that life is not only about turning a profit and what people do on their own time and with their own dime is their business. Besides, if the current obsessions with small organic homesteads, urban gardens, green roofs and backyard poultry are nothing but the latest in a long line of pointless food fads, why argue over the issue? The problem is that local food activists are spreading environmental misconceptions, increasingly picking our pockets and threatening our food security. “Vote with your fork and your consumer dollar!” might be their unofficial slogan, but their campaign material so frequently and so severely distorts the true impact of uncompetitive local agriculture that they could be held liable to prosecution under false advertising statutes. On top of that, many activists have been hard at work to mandate the purchase of pricier local food by public institutions (most prominently government agencies, school boards, hospitals, prisons, universities and military bases), prevent the redevelopment of abandoned marginal agricultural land for other useful purposes, prohibit modern agricultural practices and ultimately close national doors to foreign products.

For reasons that we will discuss in more detail later on, the outcomes of such initiatives range from bad to utterly disastrous.

To sum up our basic argument: If widely adopted, either voluntarily or through political mandates, locavorism can only result in higher costs and increased poverty, greater food insecurity, less food safety and much more significant environmental damage than is presently the case. Policies should be judged by their results, not their intentions. Consumers who bought into locavorism because they sincerely cared about making our food supply ever more secure, safe, affordable, and sustainable while supporting their local community should reexamine whether the supposed means actually lead to the desired ends.

As we will illustrate in the remainder of this book, our modern food system is an underappreciated wonder that is the culmination of thousands of years of advances in plant cultivation and animal breeding; harvesting, storing, transporting, and processing food; and retailing and home cooking techniques. Only through greater technological advances, economies of scale and international trade can we achieve the locavores’ worthy goals of improving nutrition while diminishing the environmental impact of agricultural production.

Pierre Desrochers  is an associate professor of geography at the University of Toronto,  Hiroko Shimizu is an economist. This is an excerpt from their book, The Locavore’s Dilemma: In praise of the 10,000 Mile Diet.